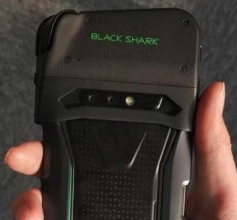 Xiaomi Redmi will launch new smart-phones, know upcoming Smartphone, features and when will launch, teaser is released. In the coming Xiaomi Black Shark, you can get 32GB of internal memory with 8GB of RAM. Also get a full-resolution large display. Let’s check Redmi Gaming Phone Price and Specs.

Redmi has launched its new smart-phone Xiaomi Black Shark. A teaser has also released by the company. It will be a gaming smart-phone is the most special thing about this phone. Black shark will be the name of this Smartphone. Gaming power of this phone has been exposed in teaser.

A curved design with rounded edges in the teaser shows that the design of the phone would be better. Apart from this, a power button is visible on the edge. Caption “Born to compete” has been written on the teaser. Company has already disclosed that the handset will work on Qualcomm Snapdragon 845. Many things are not revealed the Black Shark smart-phone, but recently this phone was spotted on the AnTuTu benchmark, on which details of its specification is given.

With all this smart-phone has scored 270,680 on the benchmark. If it is compared with Samsung Galaxy S9 + it had got a score of 265,267. Please remember that recently there is no gaming smart-phone has been launched. This Handset of Xiaomi will compete with the razor phone.

The phone has 5MP f / 2.0MP selfie camera. The smart-phone has a dual rear camera of 12MP + 12MP. The camera has a telephoto lens with optical zoom. Mi Mix 2S has latest Qualcomm Snapdragon 845 processor. Starting price of it’s about 34,200 rupees.