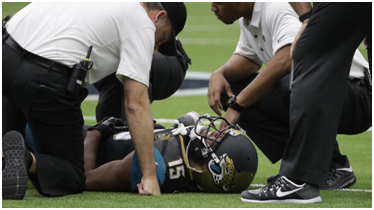 The injury made him leave the game in the first quarter only. Before leaving, he had made one catch for 17 yards. It is feared that Robinson has torn ACL and will not recover from the injury which will, unfortunately, be the end of the season for him.

The season-ending injury to Robinson is not only devastating for him but a brutal blow to Jaguar too as he was their primary X receiver and Bortles’ competent option to throw to.

Robinson led the last two seasons for Jaguars. In all, he played 43 games, took 202 catches for 2,848 receiving yards, and made 22 touchdowns. He is in the last year of his rookie contract. He was slated to make about 1 million this season.

For Jaguars, Robinson is the third player who got injured and prematurely ended the season; the two others were Shane Wynn and Dede Westbrook. It is likely that Hurns will take over Robinson’s responsibilities.

Several other NFL players who got seriously injured during the first week of the season are:

-Stephon Tuitt from Pittsburgh Steelers got injured and is feared to have torn biceps.

-Reuben Foster from the San Francisco 49ers has suffered a lower leg injury.

-Kevin White of the Chicago Bears has had a shoulder injury.

-Danny Woodhead of the Baltimore Ravens has suffered a hamstring injury.

-Brian Cushing of Houston Texans was evaluated for a concussion.