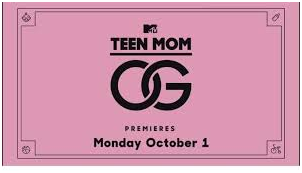 Latest Teen Mom OG Episode Highlights Season 8: MTV is all set to start the 8th season of its popular reality shows Teen Mom OG. The show will start on MTV from October 1 at 9pm. The trailer of the series has already been released on Monday.

Teen Mom OG fans are excited to see the first real look into the lives of the newest moms, Bristol Palin and Cheyenne Floyd on the show! The newly released first season 8 trailer includes cast members Maci Bookout, Amber Portwood, and Catelynn Lowell who were present on the previous season of OG. In the trailer, Bristol is shown talking about her struggle as a teen mom.

The addition of Bristol Palin to the cast of Teen Mom OG was announced a few days back only when she herself confirmed the news by posting a photo of her family and the film crew on Instagram. She also wrote to her fans and followers in the caption that she was excited about joining the cast and hoped it will also help others by showcasing her life as a young mom on the show.

Maci Considers Calling the Cops on Ryan – Video from MTV

You can see Teen Mom episode highlights and latest videos on http://www.mtv.com.au/teen-mom, you can also see photo galleries of them.

A mother of three, Bristol Palin had her first child Tripp who is now 9-year when she was just 17 years. She had given birth to her when she was in a relationship with Levi Johnston which didn’t last much. Now she has two younger children, 2-year-old Sailor Grace and 1-year-old Atlee Bay, with her soon-to-be ex-husband Dakota Meyer.

On the official website http://www.mtv.com/shows/teen-mom/episode-guide, you can watch full episodes, the latest videos, cast, and schedule.

Along with showcasing her life as a mom on Teen Mom OG, Bristol will also be seen with her parents, dad Todd Palin and mother Sarah Palin who is a former Alaska governor. It is also expected that Palin’s former ex-boyfriend Levi Johnston will appear on the show.

Palin joins returning cast members Amber Portwood, Catelynn Lowell, and Maci Bookout. Cheyenne Floyd, who made an appearance in the earlier show ‘Are You The One?’ and ‘The Challenge’ will also join the cast on Teen Mom OG season 8.

Teen Mom is an American reality series first season of which was telecasted in December 2008. 7 seasons of the show have already been shown and all the seasons have been a great success. The series focuses on challenges faced by teen moms.

Get ready to watch the new season of your favorite series Teen Mom OG season 8 with new cast members! You can also see full episode highlights and photos of 2022 galleries on the official website. Read more articles on rozyjos.