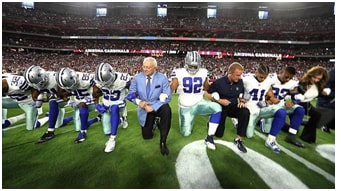 This season, the NFL announced a new national anthem policy in May. According to the policy, all team and league personnel who are on the field for the pregame are required to stand to show respect for the flag.

But it is not mandatory for all players to be on the field for the anthem; players can stay off the field or inside the locker room if they want to protest. The protests typically are meant to bring awareness to social injustices and police brutality. The new policy suspends the earlier rule that gave players the option of staying in the locker room while allowing teams to discipline players who took a knee or sat during the anthem.

The issue was raised in 2016 when then-San Francisco 49ers quarterback Colin Kaepernick protested police brutality, social injustice, and racial inequality by kneeling during the national anthem. It then spread among other players and teams.

Since 2009, the NFL had a policy that requires players to be on the field for the anthem.

Jones is the owner of Cowboys for 20 years and has a zero-tolerance policy. And he has made it clear to his team during the training. Jones will ignore the rule. Last season, he was the first owner who had declared that he would bench a player for protesting during the anthem. Two of his players had raised their fists but weren’t disciplined.

The National Football League is an American football league that consists of 32 teams. The season kicked off on September 6, 2018, with the defending Super Bowl LII champion Philadelphia Eagles defeating the Atlanta Falcons 18-12. The season will conclude on February 3, 2019, with Super Bowl LIII, the league’s championship game. Read more articles on rozyjos.